We are proud to share our first Ubuntu Core release for all our i.MX platforms.

The image is a 1GB SD card image that can be restored using zcat and dd under Linux.

What is Ubuntu Core?

Ubuntu Core is a minimalist rendition of Ubuntu. It is a lightweight, transactionally updated OS, where every application is installed confined from others. It is designed to run securely on autonomous machines, devices and other internet-connected digital things.

Compared to a “regular” Ubuntu image, it offers:

What are the requirements?

An Ubuntu SSO account is required to create the first user on an Ubuntu Core installation.

Once the account is properly created you will be able to login to the image and installing or developing snap packages.

What are snap packages?

So every piece of software must be bundle into a snap package. For instance, the entire base OS is packaged inside the core snap.

Then the kernel and its firmware and modules are packaged inside a specific kernel snap. Another mandatory snap package to boot a system is called gadget which contains bootloader environment to allow to boot the board.

How to build an application?

This will not be covered in this article since the Ubuntu Core website covers the subject very well:

How to build an OS image?

First, we provide all the source code required to build the gadget and kernel snaps to make an image that runs on all our platforms:

As the repository documentation says, it is highly recommended to build from Ubuntu 16.04 or later.

You first need to install the following packages in order to build Ubuntu Core.

Then the build is pretty straight-forward:

The output file should be named ubuntu-core-nitrogen-stable-yyyymmdd.img.gz.

Now that you’ve flashed the pre-built (or your own) image, you can start experiencing with the OS.

This section will provide some information we think are important to get started with Ubuntu Core.

At this point, the SSH key registered to your Ubuntu SSO account is on the target and you should be able to access the platform without any other credential required.

NOTE: at bootup a network.py warning can appear if your board has a WiFi module. This is a warning telling us the interface is busy, there’s no harm but we are investigating a work-around.

The snap tool offers many features, here will be listed the one we used:

NOTE: at the time of this writing, the beta (1443) became stable and breaks the boot, a snap refresh will most likely fail. We are investigating the issue with Canonical.

Our image comes with the snapweb package which allows you to manage your device via a web interface.

Simply visit the https://:4201 and should see the following window. 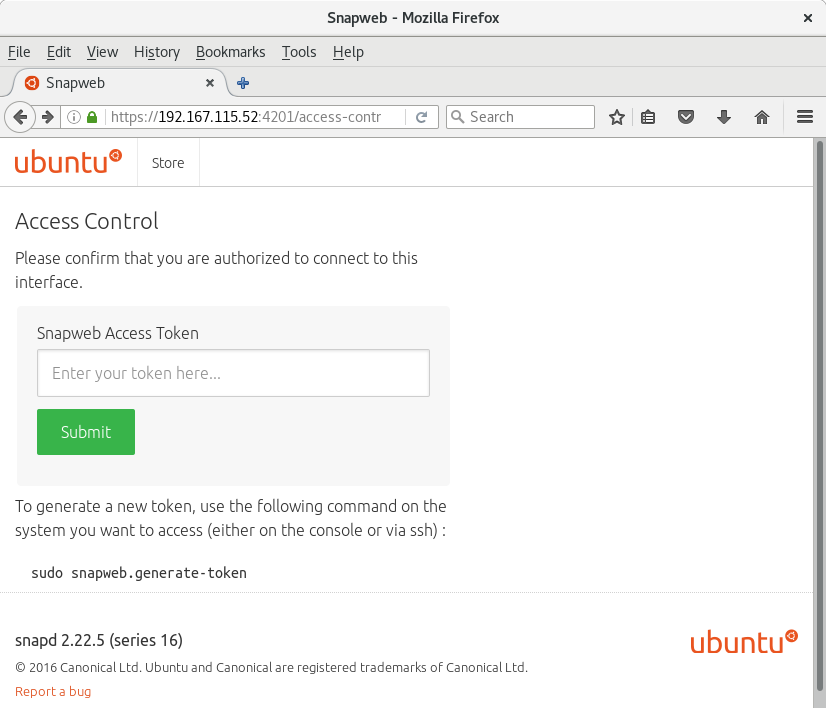 This token needs to be generate by the device, so you need to run the following command via SSH:

Then enter the provided token and click on Submit. 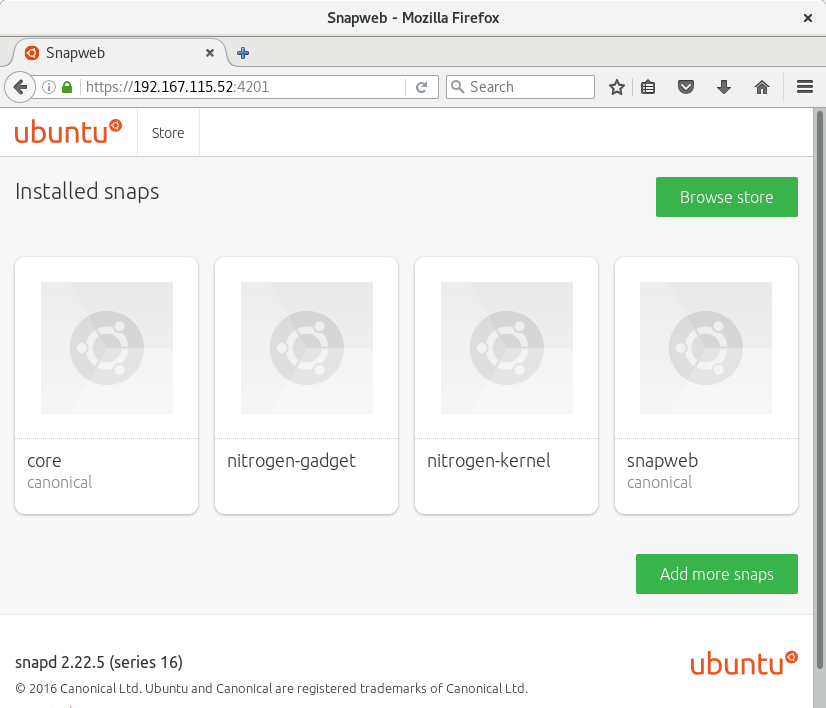 You can see above that the web page shows which packages are currently installed.

On the top right corner can be seen a Browse Store button which allows you to see which snap can be installed. 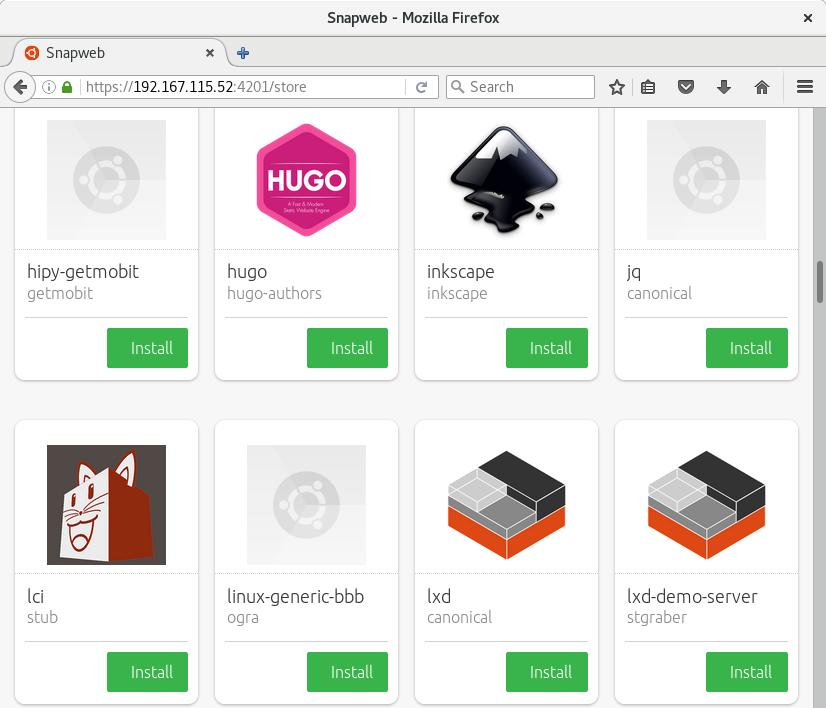 As an example, we will install the qrcode-terminal application. 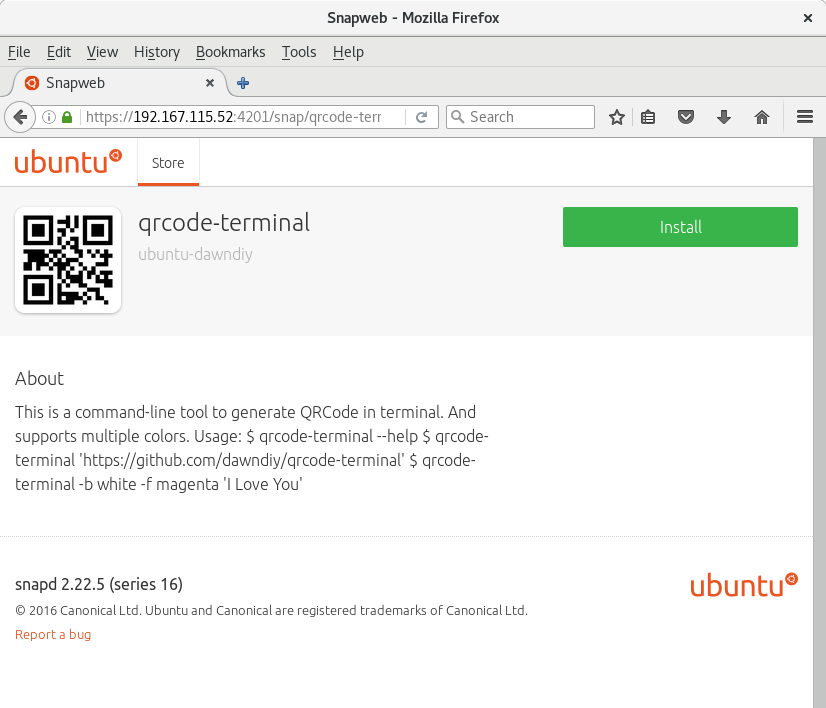 Once installed, it is possible to generate QRCode on the platform as expected: 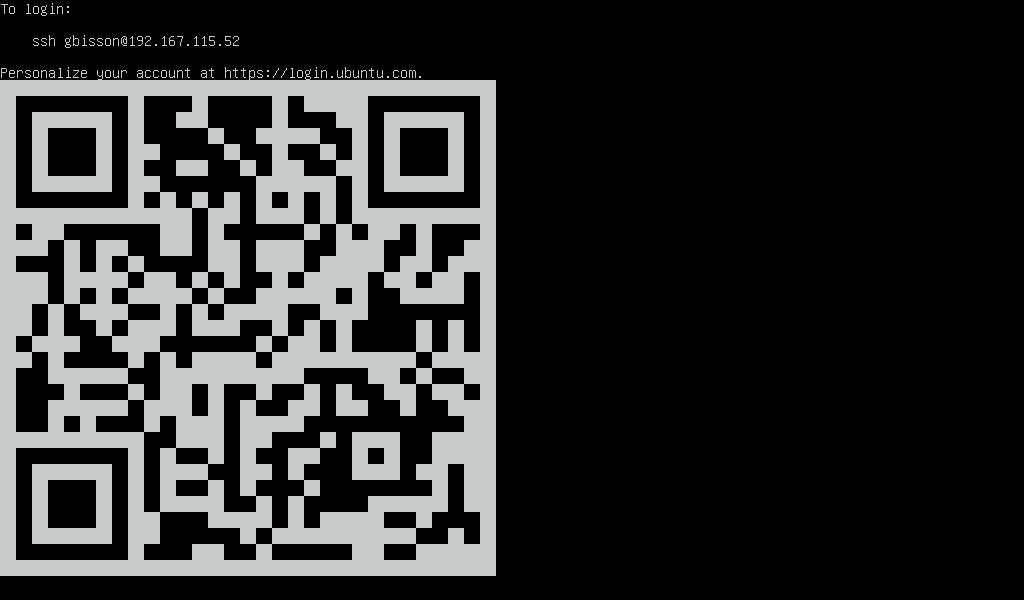 Setting up a WiFi connection

In order to setup a WiFi connection, you need to first enable the interface by creating a new configuration file:

Then in your home folder, you create add known SSID to the wireless-setup.conf file.

You now need to reboot and the platform will connect automatically to the listed SSID.

That’s it, this post should be a good introduction to this OS and how to use it on our platforms.

As usual, feel free to leave a comment below, letting us know what is your experience.