This post intends to gather all the information you need to start a project based on QNX Neutrino Real-Time Operating System. It will provide instructions to build your own BSP and/or application.

As this RTOS is based on a micro-kernel architecture, it offers a very high stability and robustness which is why it is mainly used for critical applications in medical, defense or automotive industries.

Here is a quick video that shows our QNX6.6 BSP running on our Nitrogen6X platform:

Either for BSP or App debugging, QNX Momentics IDE must be installed on your host machine:

Then the BSP can be found on QNX website:

From there can be download either our QNX6.5 or QNX6.6 BSP:

In order to build the BSP, you can either do it in command line:

Or you can use the Momentics IDE: 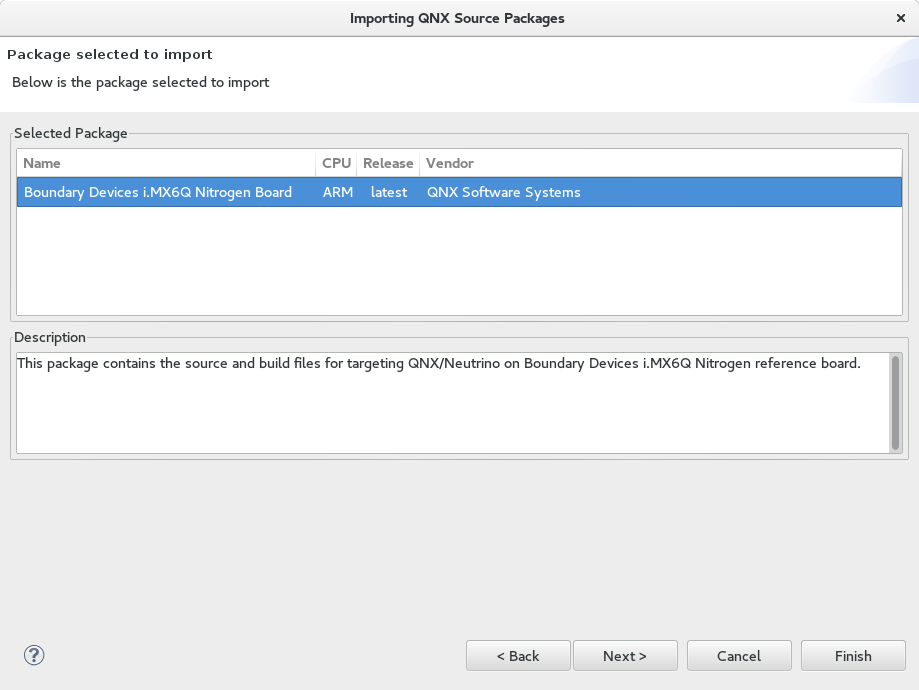 Once imported you can browse the source code: 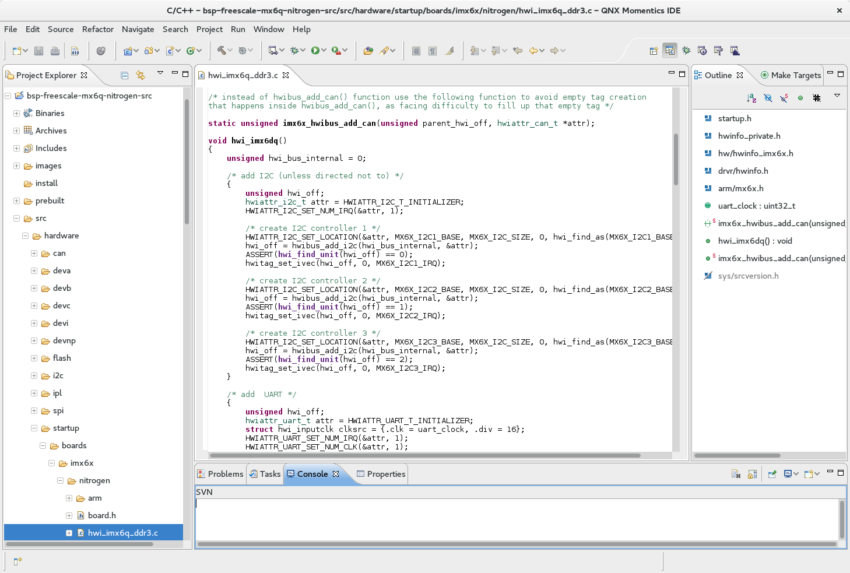 The result of the build will be located under the images/ folder.

After either manual or IDE build, the output file will be images/qnx-ifs (orimages/ifs-*.raw on older BSP).

At this point you simply need to copy this IFS image along with images/bootscript/6x_bootscript to an SDCard or USB drive previously formatted in FAT32 or ext2/3/4.

Application development is actually going to be pretty similar as it is based on the same tool:

Once the application is set up, you can specify the target architecture which is ARMv7 in our case. 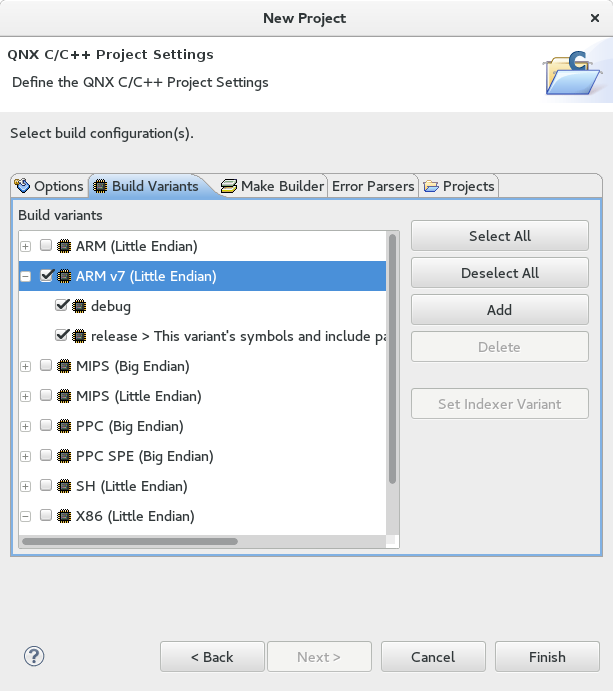 Then a sample C file will be created, from there you can start developing/debugging the application. 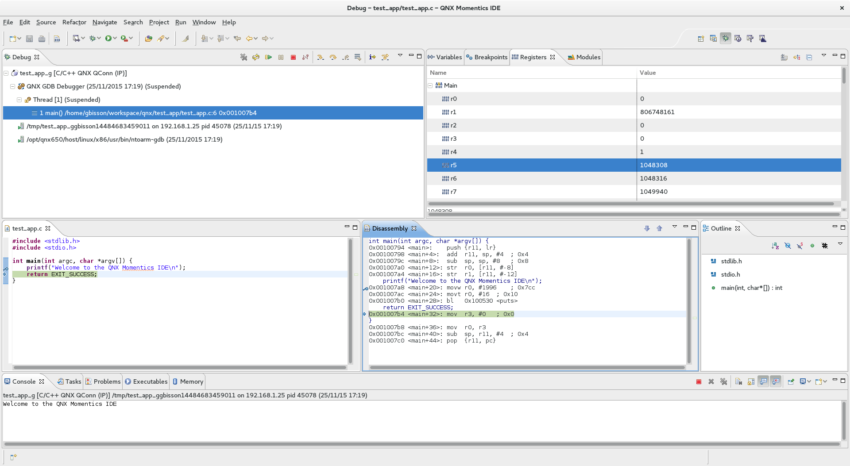 On top of an excellent debugging capability, this IDE also offers many profiling features which allow to fine tune your system, making sure the process are running as expected.

First, an Eclipse perspective offers many information about every process memory consumption: 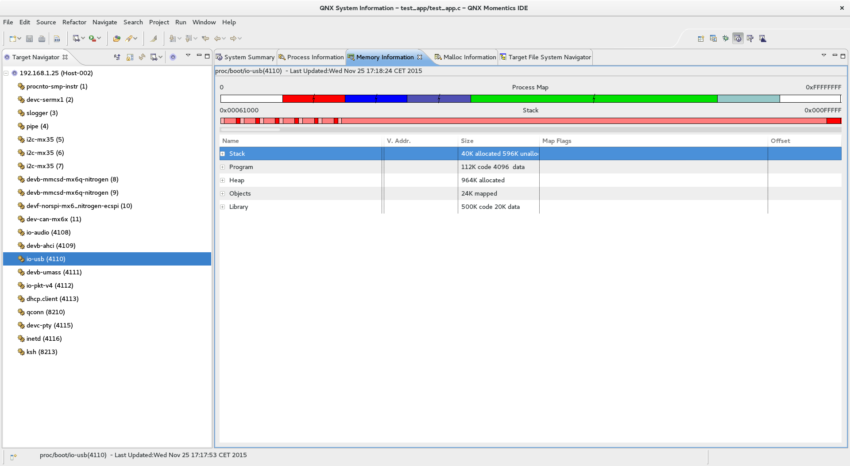 From that same perspective, you can start a profiling of several seconds on the target. This will record every interrupt occurring on the target, every task-switching, every instructions, allowing to discover is using the CPU too much or too often for instance. 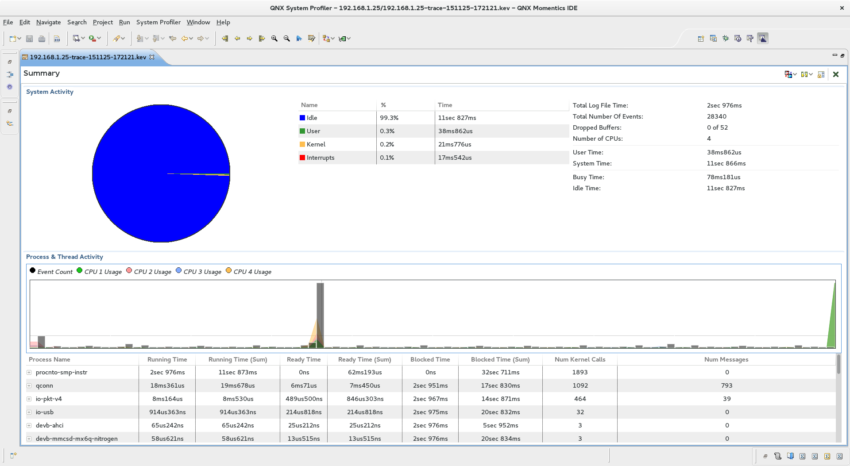 This section will give a few tips for those coming from the Linux world, the equivalent of very famous/useful Unix tools.

If you are looking for dmesg and /var/log/syslog you will see that those do not exist. Instead every log is centralized in sloginfo:

Then your application must use the slogf function in order to have the log appear the standard way.

Unix systems usually rely on the ps command in order to list the running processes, QNX has another tool called pidin.

Refer to the documentation to know about the different options of the tool.

Unix users are familiar with the man command which displays the manual pages of a command, instead QNX has use.