We’re happy to announce the availability of a new product in our i.MX6 family. The Nitrogen6_MAX is a high-end version with 4GiB of RAM, dual-channel LVDS, on-board eMMC, and full mPCIE support for the most demanding applications. 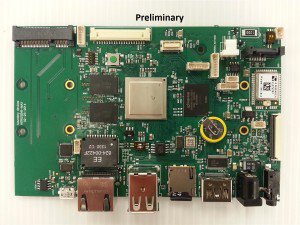 Based on your feedback about our previous designs, we’ve put together a new package providing enhanced performance in roughly the same footprint.

We’ll provide more details soon, but here are the highlights:

If you’re working with 1080P video for capture and/or playback, you know that memory gets used up very fast. The Nitrogen6_MAX
has double the amount of RAM to provide the very best performance for your applications.

PCIe connections on the SABRE Lite and Nitrogen6X are inconvenient at best. Using them requires the use of a daughter board, and even then, there were quirks like a missing PCIE RESET Pin that make them usable for preliminary testing but not for production use.

The mPCIE slot on the Nitrogen6_MAX contains the full PCIE signal set, and also supports USB signalling, allowing it to be used for 3G modems or WLAN devices that use the mPCIE form factor.

The Nitrogen6_MAX has on-board eMMC that gives an immediate 2x boost in I/O performance compared to removable MMC/SD cards because of its 8-bit data bus. Future (software) enhancements will support increased clock rates and DDR (2 cycles per clock).

We’ve heard from many of you that two UARTs for serial communication weren’t enough, so we provided a third UART on Nitrogen6_MAX that supports either RS-232 or RS-485 signalling.

Our first production run is scheduled for the first week in June.