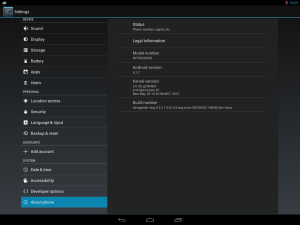 Freescale recently published a release of the Jellybean version of Android for i.MX6.
Weighing in at 247MB, it consists of:

It took us a while to get things bootstrapped, but we now have a set of buildable sources:

Note that in order to download the sources, you’ll need to be signed up for access to our private repositories.

This is alpha code!

Note that this is a very preliminary release. It’s bootable and contains a lot of functionality, but there are a lot that hasn’t been tested.
Notably:

Details of the browser issue

The last item in the list above is one of the things that put getting a Jellybean release up and running on our front burner.
Those of you who have run the recent ICS releases have probably noticed that the browser is often unresponsive.
We did some testing of the ICS code base and found that there appeared to be issues on initial page loads, and these seem to be present in the JB code base as well.
Before setting it aside, we did find out that the issues seem to be related to I/O and not CPU:

Oddly, many of the browser benchmarks report quite respectable numbers on Jellybean.
Xianzhong Li at Freescale put together a nice post on i.MX Community describing some of the GUI features of the ICS version of Android. In it there is a list of Browser benchmarks and each of them
seems to load slow, but ultimately report and demonstrate very respectible numbers.
In other words, the problems appear to be related to either user input or initial page loads.

How do I build and test?

The build process is essentially the same as on the ICS release, but with the jb-1.1.0 branch:

Note that the reference to /dev/sdc above will need to match your SD card reader.

Sorry for the preliminary release, but we’ve had numerous requests for an early update, and vacation schedules dictate that we either release an early version now or wait for a couple of weeks.
Stay tuned for updates.