This post intends to provide all the information you need to understand and use the HAB (High Assurance Boot) on your Boundary Devices Nitrogen8 platform.

The goal is also to provide an update to our HAB for Dummies blog post so that new platforms are covered.

Indeed, the i.MX 8M family (including i.MX 8MQ, i.MX 8M Mini, i.MX 8M Nano and i.MX 8M Plus) have a different boot process than older i.MX6/7 platforms. So although some of the details from the previous blog post still apply, a new version is required to explain/show the differences.

For simplicity and clarity, this guide and examples have been made on i.MX8M Mini based Nitrogen8M_Mini but the procedure applies to the entire Nitrogen8 family.

Please contact us if you need more details for other platforms.

Before getting started, let’s explain a few acronyms related to this subject

The HAB library is a sub-component of the boot ROM on i.MX processors. It is responsible for verifying the digital signatures included as part of the product software and ensures that, when the processor is configured as a secure device, no unauthenticated code is allowed to run.

In short, enabling HAB/secure boot on your platform prevents hackers to alter the boot process, making sure only the software you have previously signed/approved can be ran. The ROM and HAB cannot be changed so they can be considered as trusted software components. First, i.MX Boot ROM reads the eFuses to determine the security configuration of the SoC and the type of the boot device.

The ROM then loads the SPL image into the OCRAM memory along with the DDR training binaries. Next it verifies the authenticity of the SPL code both in flash and memory against the signature embedded in the binary (CSF).

That is the first stage verification. If it fails, execution is not allowed to leave the ROM for securely configured SoCs, also called “closed” devices.

However, with an “open” device, you will be able to see HAB events which will tell you if the image would pass the authentication process.

If it succeeds (or if the device is open), the Boot ROM executes the HDMI/DP Firmware first which in turn jumps to SPL. For other i.MX8M processors, there’s no such firmware so it goes straight to SPL.

SPL initializes the clocks, PMIC, (LP)DDR4 and UART. Then it is able to load and verify the rest of the components using the HAB APIs to extend the root of trust

A FIT image (see here for details) is used to package all those components which are:

Finally, if that second stage verification succeeds, ATF is executed which will in turn execute U-Boot.

The root of trust can be extended again at U-Boot level to authenticate Kernel and M4 images.

In order to understand the signed image generation, it is best to have a look at the final flash.bin image layout. 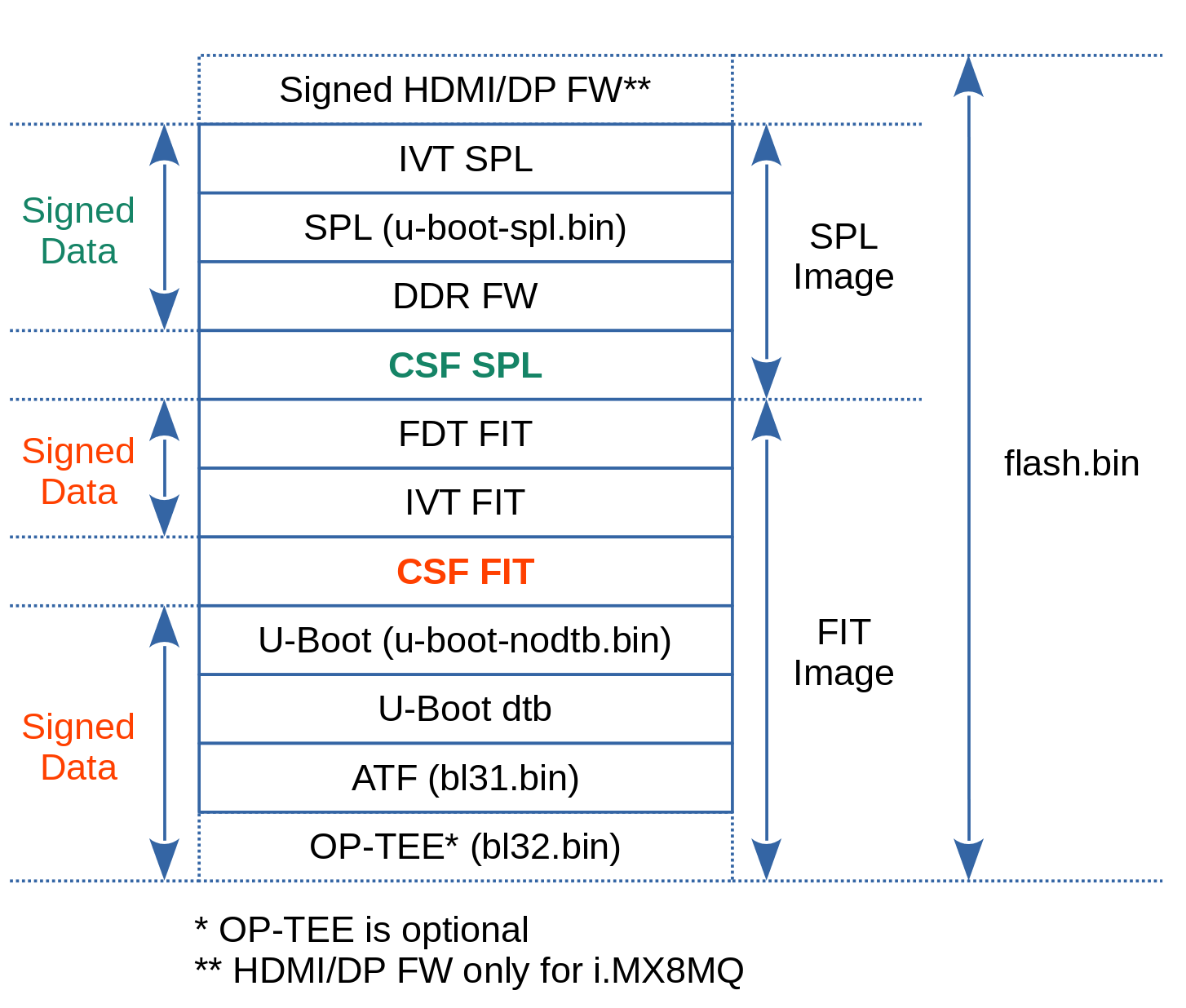 You can see there are 2 CSF binaries required, one per verification stage:

The below procedure will describe an example on how it has been done on one Nitrogen8M_Mini, make sure to modify the serial/password/keys values by your own!

1- Creation of the keys

First you need to unpack the Code Siging Tools package from NXP:

Then a couple of files need to be created, the first one being name ‘serial’ with an 8-digit content. OpenSSL uses the contents of this file for the certificate serial numbers.

Create a file called ‘key_pass.txt’ that contains your pass phrase that will protect the HAB code signing private keys.
The format of this file is the pass phrase repeated on the first and second lines of the file.

You can now create the signature keys.

Create the fuse table and binary to be flashed later.

The fuse table generated in the previous section is what needs to be flashed to the device.

The above command gives you what needs to be flashed in the proper order.

Make sure to use your own values here, otherwise your board will never be able to authenticate the boot image.

If you flashed the above by mistake, without reading the note above, know that we share the set of keys used for this blog post:

Here is an example for Nitrogen8M_Mini:

Note that the “hab block” lines are very important when creating the .csf files:

Also the “csf_off” are useful to know where to copy the signatures.

The above output gives you the addresses/offsets of (in that order):

Go to the CST tools again:

At this point you need to create two .csf file using the information from previous section:

At this point, all the signatures are generated, you can now insert them into the (unsigned) flash.bin:

You can see that the seek addresses match the ‘csf_off‘ info provided by U-Boot.

That’s a lot of offsets/addresses to remember!

You might wonder if there isn’t a way to make the whole process above simpler?

Writing this blog post required a lot of concentration not to get any address wrong, so we created scripts that can do everything for you. This script requires you to specify the path of the CST tool as well as the keys necessary for signing, that’s it. Here is the simplified version to build and sign U-Boot:

You can copy this binary to the root of an SD card along with upgrade.scr. Don’t forget that the name of the binary must match the platform name (see U-Boot blog post for the explanation).

5- Flash and test the device

Use our standard procedure to update U-Boot:

The device should reboot, then check the HAB status:

The Secure boot disabled means that the device is open. But still the HAB engine will check the image and report errors (Events) if the signature isn’t right.

Once you are *absolutely* sure you’ve understood what has been done so far and that you are sure it works, you can “close” the device.

Once again, this step is IRREVERSIBLE, better make sure there is no HAB Events in open configuration.

What about USB recovery?

Although this step was pretty complicated on i.MX6/7 due to the DCD reset, it is much easier now.

As the DCD pointer is always NULL now, you can simply turn on the USB recovery switch on your platform for it to appear as a NXP device:

At this point you just need to run uuu tool and it will load your signed binary:

If you’re not familiar with uuu, we highly recommend reading our blog post on the topic:

What about authenticating the kernel?

This part hasn’t changed since out previous blog post so you can have a look at it:

Note that the tool paths changed a bit so you might need to adapt the procedure.

Once again, to ease the process, we created a script that simply takes an Image file and signs it for you:

Then you can use the U-Boot hab_auth_img function to check your kernel signature. Here is an example for our kernel (your offsets might differ):

We have not run any test to know how much impact HAB has on boot time yet.

Enabling the signature definitely increases the time it takes before U-Boot is loaded. Feel free to let us know if you have made some comparison.