One of the many advantages of developing with NXP’s i.MX 8M Family of application processors is the ability to utilize both the Cortex-A53 as well as the Cortex-M4 core. As such, we have had questions about how to run FreeRTOS using the M4-Core of our Nitrogen8M SBC. This blog post will first present the architecture of the i.MX 8MQ processor as a starting point for the discussion, and then explain how to build and run the FreeRTOS SDK v2.3 on its MCU.

The i.MX 8M (Quad) processor is coupling a Cortex-A53 cluster (Core Complex 1, 1 to 4 cores) alongside a Cortex-M4 (Core Complex 2) to offer the best of MPU and MCU worlds. 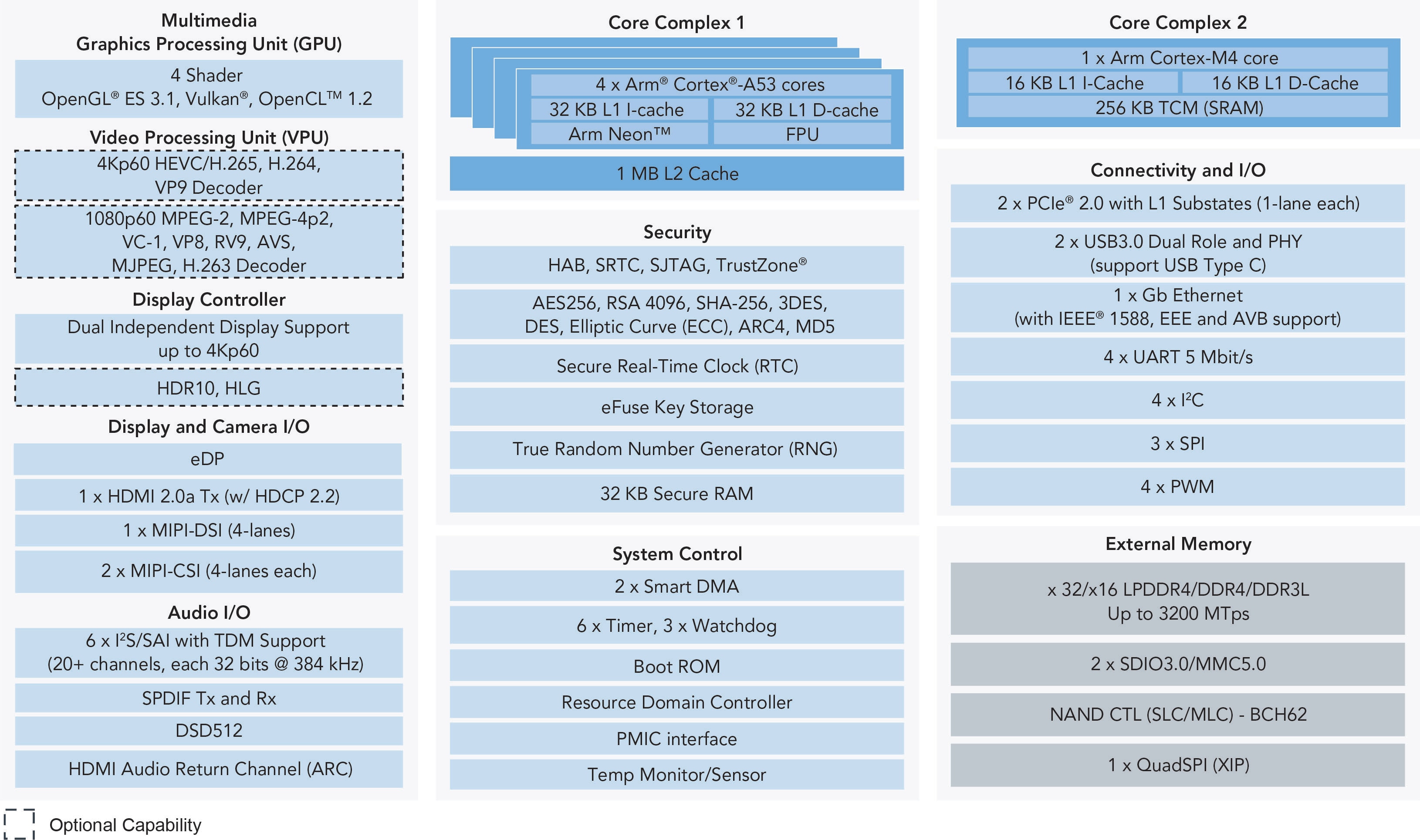 You can download any of our currently available OS images for i.MX8MQ to use the Cortex-M4:

After the upgrade and resetting the board, you should see several m4 variables:

Note that you can find pre-built versions of the examples here:

You can then start your first Hello World application on the Cortex-M4 manually (after copying one of the binary above to your storage):

The i.MX8M processors offer an MCU and a MPU in the same chip, this is called a Heterogeneous Multicore Processing Architecture.

How does it work?

The first thing to know is that one of the cores is the “master”, meaning that it is in charge to boot the other core which otherwise will stay in reset.

The BootROM will always boot the Cortex-A core first. In this article, it is assumed that U-Boot is the bootloader used by your system. The reason is that U-Boot provides a bootaux command which allows to start the Cortex-M4.

Once started, both CPU are on their own, executing different instructions at different speeds.

Where is the code running from?

It actually depends on the application linker script used. When GCC is linking your application into an ELF executable file, it needs to know the code location in memory.

There are several options in both processors, code can be located in one of the following:

Note that the TCM is the preferred option when possible since it offers the best performances since it is an internal memory dedicated to the Cortex-M4.

External memories, such as the DDR, offer more space but are also much slower to access.

In this article, it is assumed that every application runs from the TCM.

When is the MCU useful?

The MCU is perfect for all the real-time tasks whereas the MPU can provide a great UI experience with non real-time OS such as GNU/Linux.

We insist here on the fact that the Linux kernel is not real-time, not deterministic whereas FreeRTOS on Cortex-M4 is.

Also, since its firmware is pretty small and fast to load, the MCU can be fully operating within a few hundred milliseconds whereas it usually takes Linux OS much longer to be operational.

Examples of applications where the MCU has proven to be useful:

Since both cores can access the same peripherals, a mechanism has been created to avoid concurrent access, allowing to ensure a program’s behavior on one core does not depend on what is executed/accessed on the other core.

This mechanism is the RDC, it can be used to grant peripheral and memory access permissions to each core.

The FreeRTOS BSP application has reserved peripherals that are used only by ARM Cortex-M4, and any access from ARM Cortex-A core on those peripherals may cause the program to hang.

The default RDC settings are:

The user of this package can remove or change the RDC settings in the example/demo or in his application. It is recommended to limit the access of a peripheral to the only core using it when possible.

Also, in order for a peripheral not to show up as available in Linux, it is mandatory to disable it in the device, which is why a specific device tree is used when using the MCU:

The memory declaration is also modified in the device tree above in order to reserve some areas for FreeRTOS and/or shared memory.

This API offers the following advantages:

Note that the DDR is used by default in RPMsg to exchange messages between cores.

Where can I find more documentation?

The BSP actually comes with some documentation which we recommend reading in order to know more on the subject:

In order to build the FreeRTOS BSP, you first need to download and install a toolchain for ARM Cortex-M processors.

FreeRTOS relies on cmake to build, so you also need to make sure the following packages are installed on your machine:

The FreeRTOS SDK v2.3 is available from our GitHub freertos-boundary repository.

Finally, you need to export the ARMGCC_DIR variable so FreeRTOS knows your toolchain location.

All the applications are located under the nitrogen8m folder:

As an example, we will build the helloworld application:

You can then copy that hello_world.bin firmware to the root of the eMMC or any other storage you use.

By default, the firmware is loaded from eMMC to TCM.

Before going any further, make sure to hook up the second serial port to your machine as the one marked as “console” will be used for U-Boot and the other one will display data coming from the MCU.

This blog post only considers the firmware file is named m4_fw.bin, if you wish to use another name, you need to set the m4image variable:

If you want to load the MCU fimware manually from eMMC, here is the procedure:

If you want to load the MCU fimware from TFTP:

In order to start the MCU automatically at boot up, we need to set a variable that will tell the boot.scr to load the firmware.

To do so, make sure to save this variable.

The Hello World project is a simple demonstration program that uses the BSP software. It prints the “Hello World” message to the ARM Cortex-M4 terminal using the BSP UART drivers.

The purpose of this demo is to show how to use the UART and to provide a simple project for debugging and further development.

In U-Boot, type the following:

You can then type anything in that terminal, it will be echoed back to the serial port as you can see in the source code.

This demo application demonstrates the RPMsg remote peer stack. It works with Linux RPMsg master peer to transfer string content back and forth. The Linux driver creates a tty node to which you can write to. The MCU displays what is received, and echoes back the same message as an acknowledgement. The tty reader on ARM Cortex-A core can get the message, and start another transaction. The demo demonstrates RPMsg’s ability to send arbitrary content back and forth.

In U-Boot, type the following in order to boot the OS automatically while loading the M4:

Once Linux has booted up, you need to load the RPMsg module so the communication between the two cores can start.

The last command above writes into the tty node, which means that the Cortex-M4 should have received data as it can be seen on the second serial port.

Same as previous demo, this one demonstrates the RPMsg communication. After the communication channels are created, Linux OS transfers the first integer to FreeRTOS OS. The receiving peer adds 1 to the integer and transfers it back, a hundred times and then stops.

In U-Boot, type the following:

Once Linux has booted up, you need to load the RPMsg module so the communication between the two cores can start.

While you can send the received data from the MCU on the main serial port, you can also see the data received from the MPU on the secondary serial port.

That’s it, you should now be able to build, modify, run and debug

This post intends to provide all the information you need to understand and use the HAB (High Assurance...

We are pleased to announce that our BD-SDMAC Wifi + BT module is now Bluetooth 5.0 Compatible! We...