So you want to run Debian on a Nitrogen board.

Thanks to the efforts of the top-notch Debian ARM team, this is really painless. The instructions I’ll list below use the ‘netboot’ armel image along with our Linux kernel to get a full-featured Debian system running.

There are some caveats that I’ll mention along the way, primarily in the area of kernel update support. We haven’t yet determined what it would take to integrate our kernel patches into a Debian package. If anybody has pointers, please pass them on.

The Debian network boot image we’ve chosen is targeted at the versatile ARM platform and is available on the ‘armel’ section of the Debian downloads site. There are two files in that directory: initrd.gz and vmlinuz-2.6.26.

The first steps are to grab the initrd.gz file and convert it to a format that U-Boot can handle. U-Boot likes to wrap RAM-disks in a format that contains a CRC so that you don’t boot partially downloaded images. Please note that you need the uboot-mkimage package (sudo apt-get install uboot-mkimage) on your development machine to do this.

Copy the resulting file, initrd.u-boot, to your SD card and you’re ready to boot the netboot image. This is all that’s technically needed to boot a Debian image, although there are some other steps you’ll probably want to walk through. 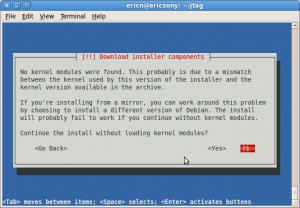 If you’ve booted your SD card image, you’ve probably seen that it’s not happy with the installation media because your SD card is probably configured with one big FAT partition. The Debian installer has facilities for re-sizing partitions and such, but you’re probably best off doing this by hand on another machine. Because of the way SD cards handle wear-leveling, we recommend that you give the boot partition at least 100MB, but you can get rid of the rest.

You can leave the rest of the disk unpartitioned, and the Debian installer will take care of it for you.

You’ll receive a handful of warnings like the one on the right during the installation process that refer to the lack of kernel and boot-loader support. You can safely ignore these, since you’ll need to maintain the kernel separately from the Debian package manager.

The installation process will install the base Debian system first, then prompt you for the type of install (desktop, web server, etc). Unless you have an 8GB or larger SD card, you won’t have sufficient space to install the full desktop package. We recommend installing just the standard system first. You can customize your installation later by using aptitude or apt-get.

Once the installation completes, one final step is needed to activate your Debian system. The boot loader is still configured to load the netboot installer RAM-disk. We’ll need to configure U-Boot to skip loading a RAM disk entirely and use the new root partition instead.

Once you’ve gone through all of this, you’ll be able to login and select from the wealth of available packages. To give you just a taste, here are screenshots of Fluxbox, MPlayer and IceWeasel running on our 7″ WVGA panel. 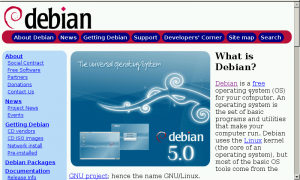 IceWeasel on Nitrogen board