We are glad to deliver the latest Android Oreo 8.0.0 GA release for most our i.MX6 platforms: 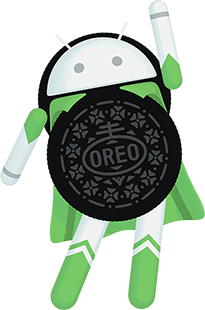 You can download the Android Oreo images from here:

These archives include all the files to be flashed using fastboot.

First you need to enter fastboot mode which can be done from U-Boot prompt, enter the following command:

Some might wonder why we deliver this release as fastboot images, here are some of the reasons:

Google provides a list of notable changes for developers:

But the main change comes in the overall architecture since Treble, more in next section.

Treble or not Treble?

Oreo brought a new architecture called Treble in order to improve BSP porting from one version of AOSP to another.

While this release isn’t entirely compliant with Treble, it did improve a lot:

The goal is to be able, in the future, to just flash a new OS version system.img which will work nicely with the previous vendor.img.

If you’re interested about learning more about Treble, we recommend the following links:

This Android Oreo release is based on a 4.9.x kernel. It therefore benefits from all our latest drivers/fixes as well as newest Vivante graphics libraries (v6.2.2).

Also, as some people already asked about it, this kernel fixes the SPECTRE vulnerabilities found on the Cortex-A9.

As mentioned in our 2017.07 U-Boot release (more than a year ago), 6x_bootscript (formerly 6q_bootscript) was introduced back in 2012 when there was no standard for booting an OS.

Since then, U-Boot included such standard:

The default bootscript name is now boot.scr for any OS which makes much more sense that our 6x_bootscript that wasn’t only for i.MX6x any more.

So what does it mean?

For those already familiar with our releases, here is a condensed version to get the Android Oreo source code: